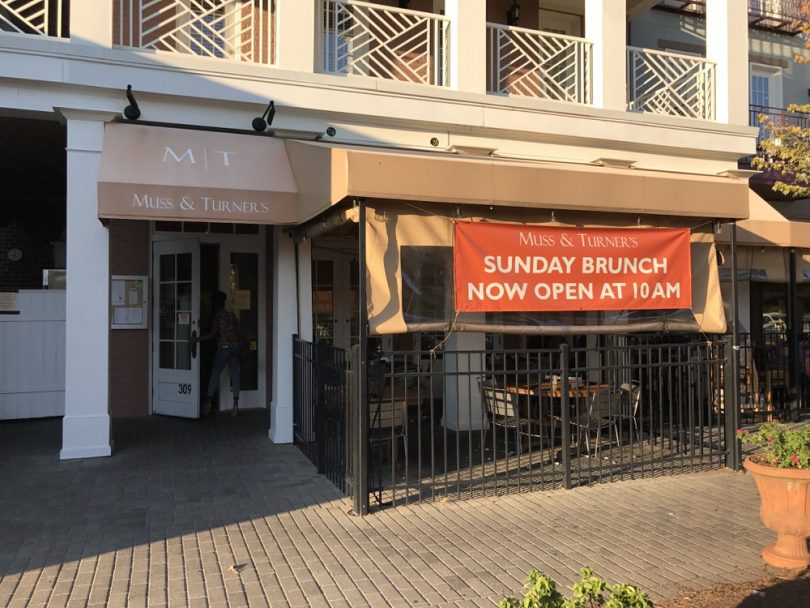 A venture outside the Perimeter is rewarded with velvety cheesecake

After our twenty minute drive from Midtown to Muss and Turner’s, we thought we were lost. Construction cluttered the exit ramp, making our right turn sharper than it ought to be, and then our trusty Google Maps told us to pull into what looked like a business park dotted with faux colonial-style nail salons and insurance companies.

But sure enough, squeezed right in there beneath a tan awning: Muss and Turner’s. I stumbled across their listing while looking for surprise OTP (“outside the Perimeter” — yikes!)  dinner destinations on OpenTable, and a glance at Muss and Turner’s philosophy (“Authenticity rules … pretense stinks”) sealed the deal. So, taking advantage of lighter weekend traffic, we pulled on our parkas, hitched up the dog sled, and made a trek north of I-285.

Two words: Worth. It.

A few Google Maps review queens have left nastygrams when they didn’t receive obsessive service, so we weren’t sure what to expect upon entering. In our case, though, the greeters were smiling, friendly, and chatty, and in no time at all a young lady found us a table right in the heart of the cozy dining room. 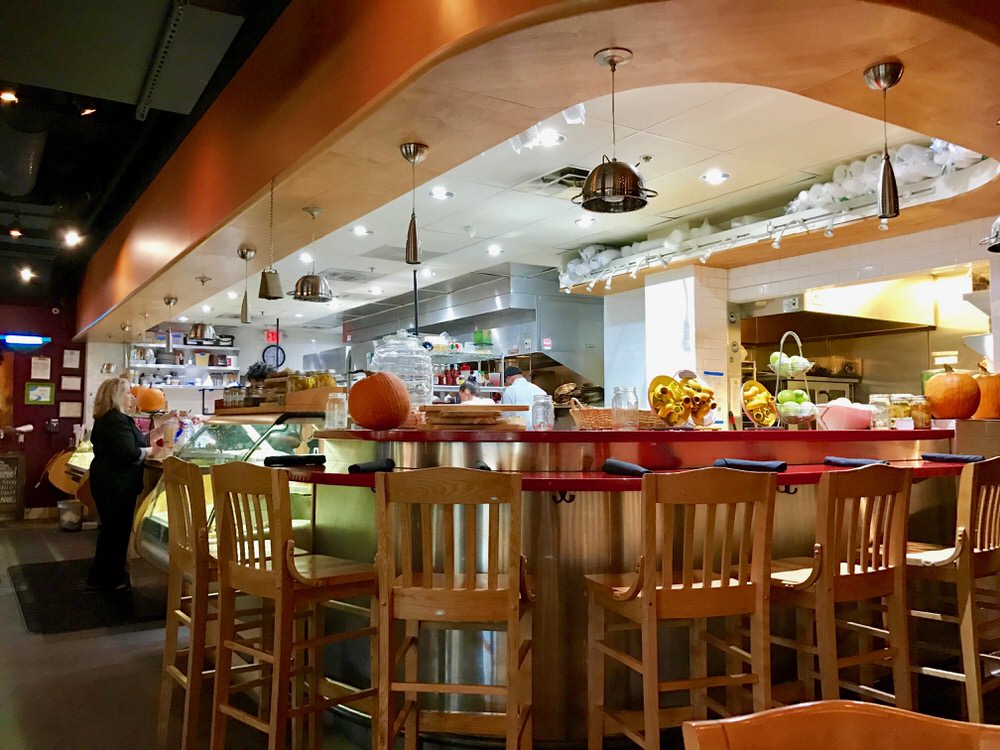 Once seated, there was a bit of confusion about who our server would be. Mike, a tall, bearded fellow with the makings of a serious man bun atop his head, greeted us warmly … and then was mysteriously replaced with the warm and equally friendly Emily. But once that was resolved, everything went smoothly, from the delivery of my Green Flash IPA to the last bite of goat cheese cheesecake.

And while the truth is that service here is not obsessive — in fact, it’s pretty laid back — that’s exactly the vibe that Muss and Turner’s is trying to create. Servers here will be helpful (but they won’t try to be your faux best friends), knowledgable (but they won’t go on and on about every ingredient), and attentive (but they won’t hover at your elbow with a water pitcher). So: relax. Go with the flow. You’re in good hands.

We started with the pimento cheese: a neon-orange scoop flecked with just enough spice to give it bite, with a sidecar of cracked pepper lavash (a thin, crisp flatbread). 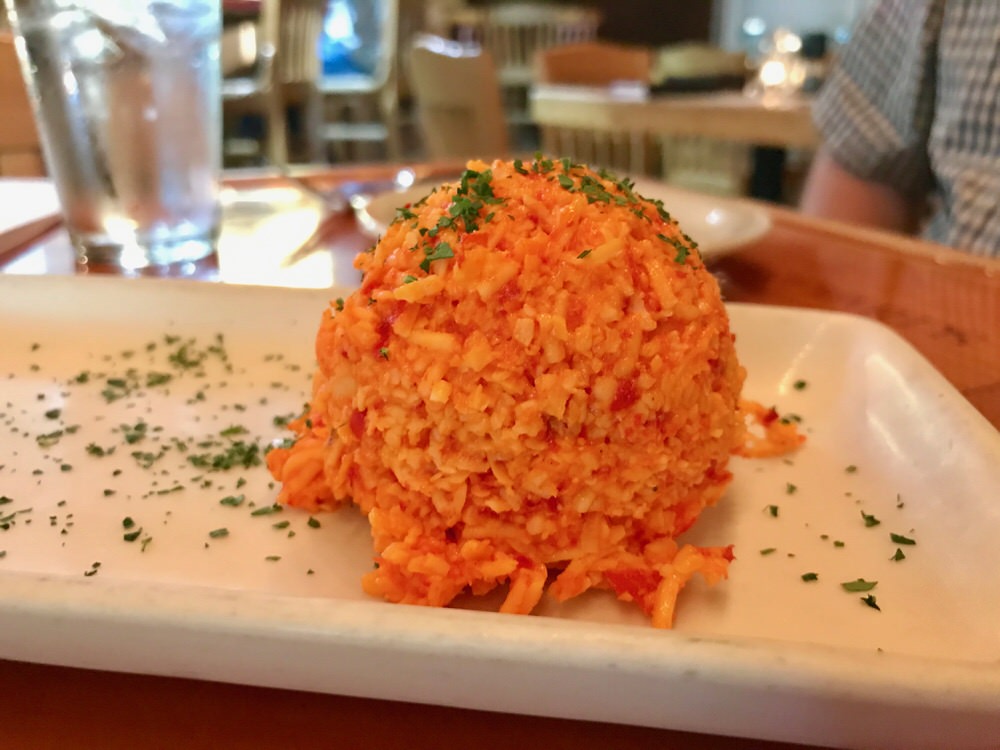 Clyde comes from a long line of New Albany ladies who are picky about their pimento cheese, and we agreed they’d serve this version up to the bridge club without hesitation.

The Burger figures prominently in the reviews, so when Clyde ordered The Ruben, I decided to check out a steak on our next visit and go with a sandwich, too. I’m not a fan of kraut, so I normally don’t ask for a bite of a Ruben sandwich, but for this one, I made an exception: 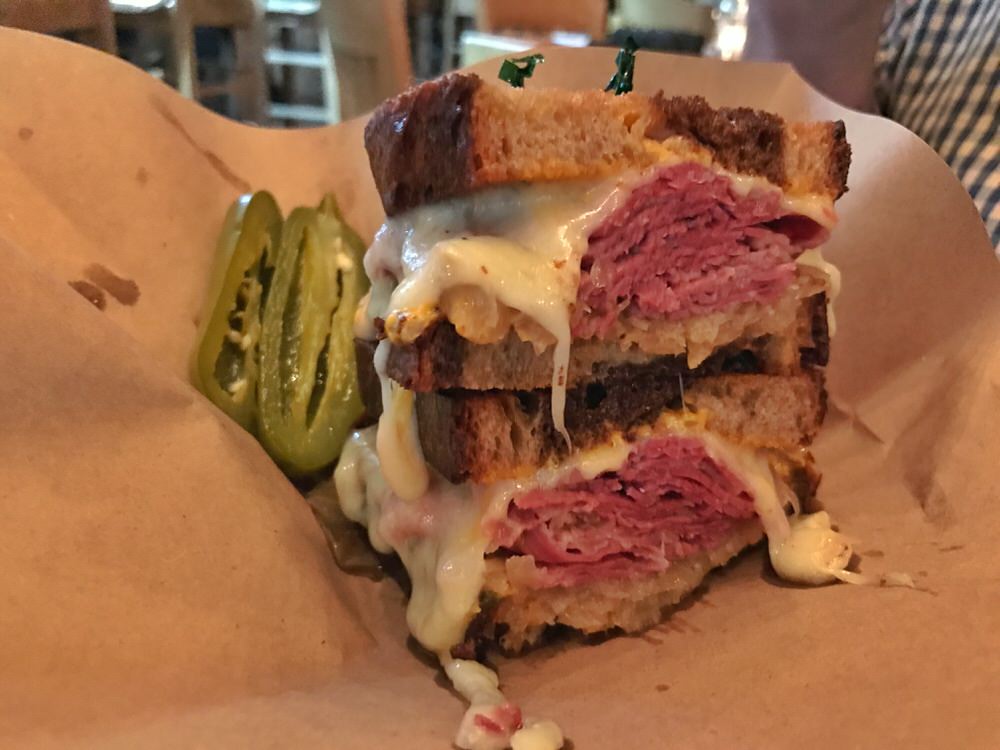 I’m glad I did. The ratio of corned beef (lots and lots) to cheese (lots) to kraut (some) was perfect, and that toasted rye was the perfect carby platform for the sandwich fixin’s.

My burger was very, very good — a solid A minus, losing just a point or two for the bun, which struck me as a bit thick and textured for a patty this tasty. It was cooked to perfection, and dressing it further than the kitchen had would have been a sin, because the balance of tart aioli and savory meat was spot on: 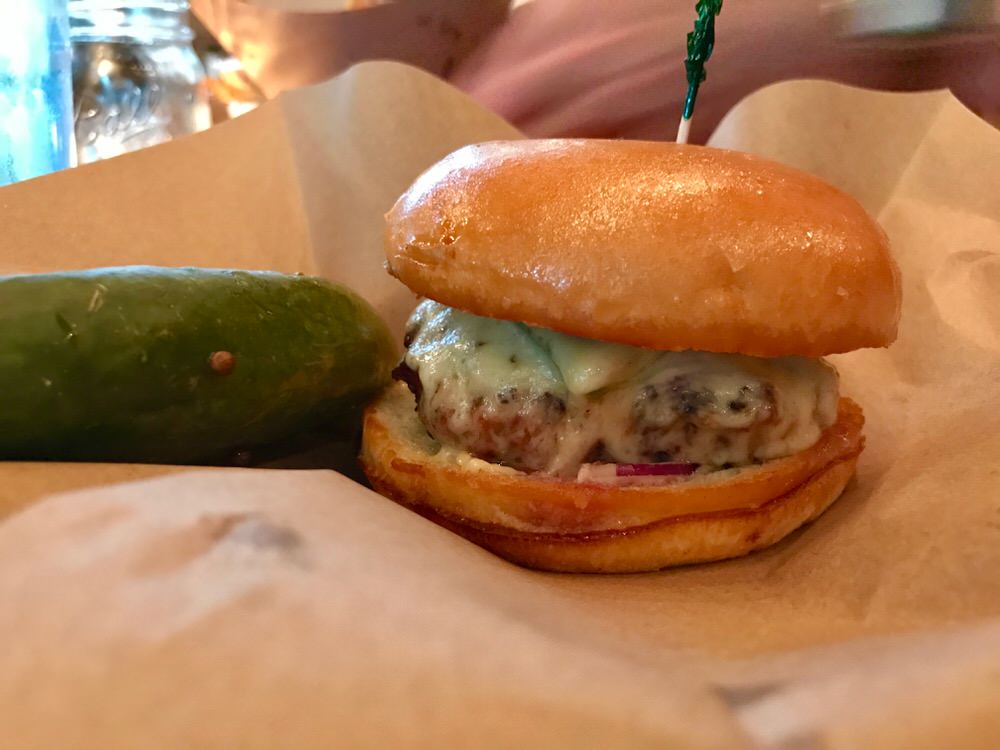 After two fat sandwiches and a massive (half order!) of fries with a sidecar of sambal-laced dip (cool to the touch, but spicy on the tongue), we were pretty much done, but Emily did such a good job describing the goat cheese cheesecake, we ended up splitting one.

Desserts are rare things for me these days, so when I indulge, I want that dessert to be an event. Trumpets should sound. Angels should sing. The clouds should part, and a shaft of Heaven’s Light should beam down on the dessert in question, and a voice like thunder should say, “Behold this blessed confection!”

Much to the surprise of the other diners in the room, this is exactly what happened with the goat cheese cheesecake. I do not have photographs. There wasn’t time. Clyde was forking that sucker up like wildfire, so I had to drop my iPhone 7 Plus fand fight for my fair share. A serving is about the size of an optimistic hockey puck — round, velvety, perfect — doused with thin caramel sauce and topped with chocolate chips (which Emily called “little chocolate kisses”).

Clyde drove home because, frankly, that cheesecake left me a little weak in the knees. What is a dessert like that doing lurking around in the wilderness of the OTP? We need to send out the Midtown Militia, take over Vinings, and move Muss and Turner’s onto Peachtree Street, where that kind of friendly, laid-back, unpretentious service and solid food is much harder to find.