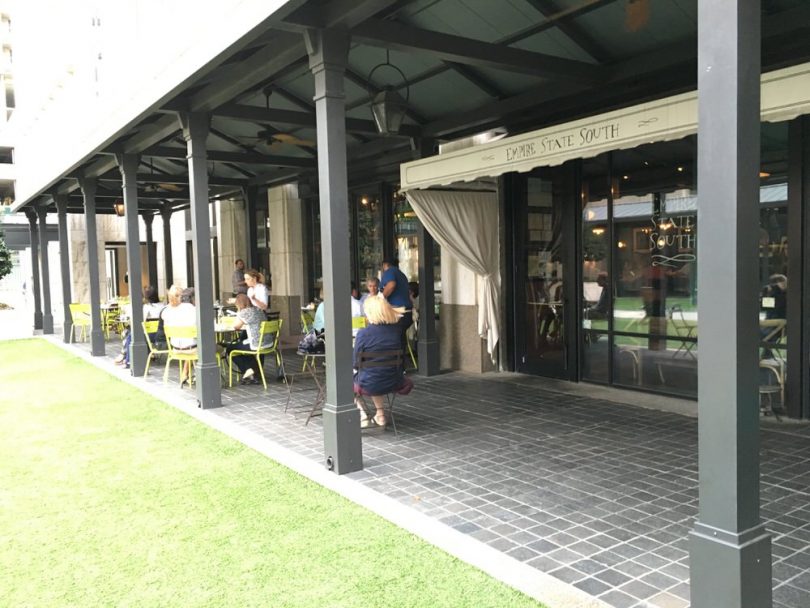 After enjoying a wonderful anniversary dinner here two years ago, we booked a Saturday night “Father’s Day” dinner at Empire State South. We had a pretty good experience, but when spending about seventy dollars per head at a restaurant associated with a James Beard award-winning chef, is “pretty good” good enough?

Appetizers and small plates were perfection, including a succulent (but stingy and sloppily-plated) serving of octopus:

We also enjoyed the six whole Georgia shrimp in chili bourbon vinegar, and the spectacular farm egg with crunchy rice:

Entrees, however, weren’t up to snuff.  My mustard-encrusted pork loin was pretty darn chewy (and what’s easier to prepare than a tender pork loin?).

Even the waygu flank steak was surprisingly tough.

Two servers were knowledgable and efficient, but one seemed to think he was auditioning for the part of “Eccentric Trailer Park Resident,” which struck us as inappropriate in this setting.

A tip: while the patio seating can look enticing, that space is a natural wind tunnel. If it’s breezy at all, you’d do better snagging a seat inside.

Long story short: ESS may have reached that tipping point where the restaurant has shifted from establishing a reputation to merely coasting on it. Still, we recommend the place — though more for pricy tapas, perhaps, than an all-out celebratory meal.

At these prices, we expect more than uneven service and indifferently plated, mediocre entrees.