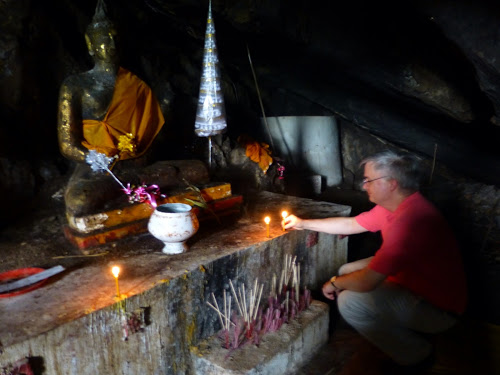 Our friend, Mickey, asked, “There is a shrine in a cave in Lopburi. It is not visited often by tourists. Would you like to see it?”

I said yes. Of course I said yes! You don’t travel half-way around the planet and turn down the opportunity to see sights that very few non-local people ever see. You don’t have adventures by sticking to the beaten path.

The unbeaten path, in this case, started out with ten or twelve stone steps leading out of the noonday sun and into the cool shadows of mountain overgrowth. It was still humid there — this is Thailand, you know — but much shadier. So far, so good.

What was not apparent from this appealing beginning was probably the reason most Americans never see the shrine. The jungle conceals that the path to the shrine is actually a rough stone staircase — twenty-five flights of stairs, to be exact. This didn’t really dawn on me until we were five flights up … and at that point, despite the fact we were huffing and puffing, we figured we were committed.

Ten flights up, my hair and shirt were soaked with sweat. Fifteen flights up, and my thighs were burning. I admit that I sat down for five minutes or so and caught my breath — not an easy thing to do, when the air is as hot and wet as the steam in a sauna.

Twenty flights up, and there was a break in the undergrowth, revealing a hazy view of the town: 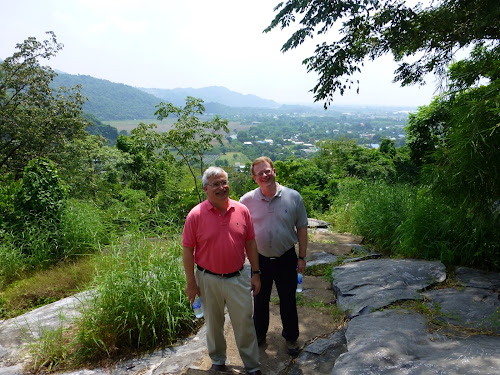 I thought we were there … but no, there were still five flights to go. (And my efforts were made all the more exhausting by that fact that a local woman — The Shrine Keeper — was jumping ahead of us effortlessly, like a mountain goat, despite the fact she was twenty years my senior.)

But then, we reached the cave. There was an old, crumbling entry, complete with the sharply-sloped, inverted V-shaped archway that usually marks the entry to a shrine or tempe here. The supporting columns had been painted white once; now, in the mountain weather, they were chipped and cracked and faded.

We stepped inside. The damp, chilly air was filled with rustling, whirring, and squealing: a colony of bats, concealed in the cracks of the ceiling above us. Stone steps led further down into the gloom, where a neglected Buddha sat on a simple pedestal. 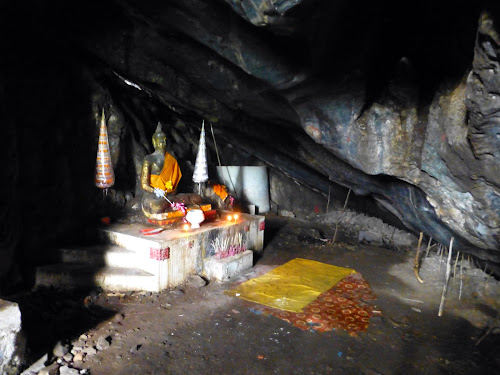 Clyde rubbed his gold leaf on the Buddha’s bicep. I rubbed mine on the Buddha’s head. We both made wishes, according to the custom. (I can’t tell you mine, but, in some ways, it has already come true.)

That done, it was time to make our way back down the mountain.

We loved Lopburi: the splendid palace, the Khmer ruins, the ornate temple housing Buddha’s footprint. But the defining moment of the day — and perhaps of this entire trip, for me — was that moment in the mountain cave, kneeling by my husband in a shrine few people will ever see.