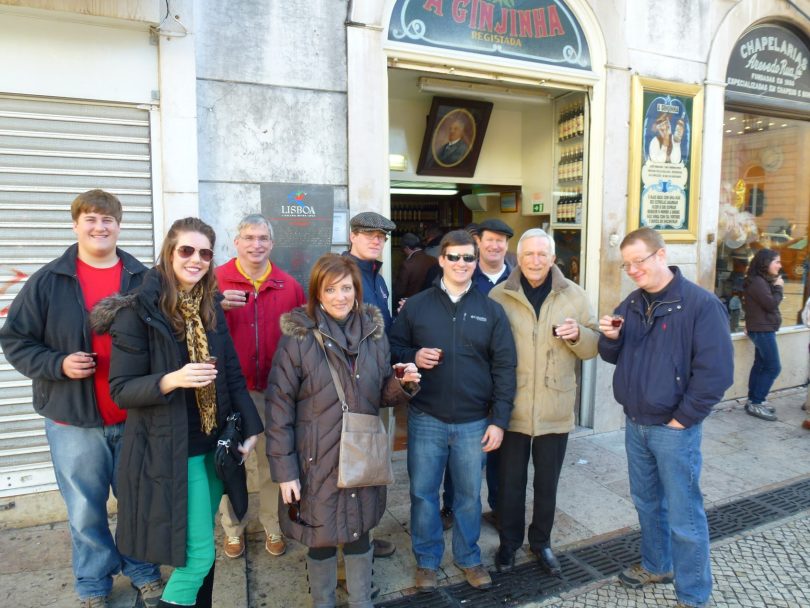 In the photo above, my youngest nephew (Walter), my partner (Clyde), and my oldest nephew (Parks) are sampling ginja, a sour cherry liquor popular in Lisbon, usually served with a bit of fruit in the bottom of the glass.

If you’re going to try ginja, you want to do it at The Ginjinha, where the concoction has been served for five generations. As Paolo, our excellent guide from Lisbon Explorer, explained, ginja is one of those authentic Portuguese treats — one of the things you really must try while in Lisbon.

As you can see from Walter’s expression (the scent alone was enough for him, and I think this photo captures the moment that glass came closest to his lips), ginja is going to be, for most people, an acquired taste. Though laced with brandy, cinnamon, and lots of sugar, ginja pretty much tastes like a shot of cherry NyQuil. I’m glad I tried it … but I’ll never belly up to the bar and say, “Gimme a pint of ginja.”

But my most memorable beverage on this trip to Lisbon wasn’t ginja. It was Coke.

Almost exactly a year ago, I gave up all colas and carbonated beverages — a cold-turkey change of habit that cost my friends at Coke about $1100 in lost revenue per year. I used to joke about my creativity being fueled by Diet Coke and Coke Zero. I had a three can a day habit. But one morning, I just woke up and realized I didn’t *need* Coke in my life any more … and so I stopped drinking their beverages. Frankly? I never missed them.

But on New Year’s Eve in Lisbon, after a thirsty day of touring the city, I found myself (for the first time in a year!) jonesing for what I imagined would be a little taste of home. So I hit the convenience store next door to our apartment and bought a twenty-ounce bottle of The Real Thing. (Real, I say, because in every country *but* the United States, Coke is still sweetened with real sugar. In the US, they’re selling a fake, fattening brew laced with high fructose corn syrup — otherwise known as “the sweat of Satan.”)

I went upstairs. I got some ice. I poured myself a glass. I settled down on the couch. I took a sip.

The Coke was thick — almost viscous. It was aggressively sweet. It was surprisingly salty. It sizzled the way a mouthful of battery acid might sizzle. And all that flavoring! Chocolate and caramel and ginger, all colliding at once! It was an accident scene of flavor, I tell you, and it was all taking place in my mouth!

I swallowed it just to get rid of it.

I finished the glass, but I didn’t finish the bottle. In the end, I concluded that Coke, like ginja, is an acquired taste. Having acquired that taste as a child and lost it as an adult, it seems I’ve fallen out of the Church of Coke entirely.